We invite young talented people from other countries and regions to Japan through Sakura Science Exchange Program in a collaboration of industry-academia-government, to introduce and offer experience in Japanese science and technology. Beginning in 2014, and for a period of 6 years, over 33,000 young people visited Japan on this program. 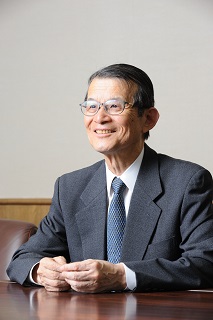 In order to create a sustainable world for the future, it is extremely important for countries and regions around the world to understand each other's situations and differences, build a sense of mutual trust, and realize social changes through science, technology and innovation. Japan's science and technology, through the great and many efforts of our predecessors has also played a role in creating leading-edge and ground-breaking results and in driving the world’s economy and society.

However, in the field of science and technology, I think that the recognition that Japan is a member of the world was somewhat weak. From this perspective, I believe that in the future, from a more global perspective, it is important strongly to support excellent young people who are eager to take charge of the next generation in their choosing the path of science and technology, or in promoting innovation that fit the realities of their respective countries and regions.

In 2014, JST began the Sakura Science Program. This program is designed to invite young people from countries and regions to Japan for a short period of time, and to allow them to come into contact with leading-edge science and technology and Japanese culture, and to provide them with opportunities to understand each other and to build strong relationships through interaction with young people in Japan.

To date, more than 33,000 young people have been invited to Japan on this program. This program has received high praise from universities, research institutes, municipalities and private companies in and outside of Japan. However, in order to cope with various circumstances surrounding science and technology and rapidly evolving international trends, and further to develop the program, we have decided to expand the target of our invitations to all countries and regions in principle, as well as to cover the humanities and the social sciences. Furthermore, we plan to respond to the global spread of COVID-19 and the advent of a digital society. We will also actively engage in online exchanges. 2021 is a major transitional period for the Sakura Science Program. It is also considered to be a developmental period.

The foundation of all of our activities is to build trust and deepen mutual understanding based on the interaction between people. We are convinced that the Sakura Science Program will make a significant contribution toward that goal. We strongly hope that young people around the world who have great hope and want to challenge the future will find out about Japan through the Sakura Science Program and will use this opportunity to take a big leap forward.