As of 2nd June 2020 the total case of Covid-19 in Papua New Guinea is 8 persons with no death. Six cases were mild and have fully recovered; two were moderate cases, admitted to hospital and recovered, one of which was repatriated. Initially, samples were tested locally using PCR at the Papua New Guinea Medical Research Laboratory, however, due to the administrative and technical issues faced, the government intervened and had samples sent to Australia for testing. The WHO and the Australian government have helped with the testing capabilities in the country by supplying Gene-Xpert Cartridges for COVD-19 testing. It was the best option for testing because we already use Gene Xpert machines available for Tuberculosis testing throughout the country. The number of tests performed as of May 30th is 4646, which is out of a population of 8.9 million.

The first confirmed COVID-19 case in PNG was an imported one, found on March 19, 2020, and was officially announced by the Prime Minister the following day. The patient was then transferred to the home country (Australia) on March 23, 2020. However, on March 22, 2020, the Prime Minister declared a state of emergency and limits movement of people for a period of 14 days. The second case was reported on April 6, which was then followed by 5 confirmed cases reported on April 16, 2020. The state of emergency was extended for another 4 week until the beginning of May.

The latest case (Patient no.8) of PNG’s cases is from Eastern Highlands Province. This 45 year-old woman confirmed with COVID-19 is now isolated in Asaro. The Asaro District Hospital was locked down. She was reported to have got sick after travelling back from Lae, after staying with her brother. This brother has been identified and his sample was collected for testing, which turned out to be negative.

Contact tracing was aggressively carried out in in PNG to control the spread of the disease. The contact people includes workmates, relatives, close family members and neighbours. The workmates include the National Operation Center (NOC) staff. Contacts have also been asked to self-quarantine as a preventive measure.

There are still international travel restrictions and as of today the government is planning to extend the state of emergency for 2 months. We have improved surveillance at our boarders and testing in all 22 provinces.

There is so much to learn from the current pandemic. From the national viewpoint, the government under the leadership of Prime Minister James Marape acted promptly to shut down international travel and tighten boarder security and improve boarder surveillance. The pandemic exposed the vulnerabilities of the national health system.

In hindsight, it is fair to state that we were never prepared nor did we have the manpower or infrastructure to deal with what was coming. We lacked testing capabilities relative to the population size and if the pandemic took a turn for the worst in PNG, we would definitely have a shortage of manpower in the frontline to deal with sick patients. In addition to a shortage of manpower, the country had only 15 ventilators (i.e. 1 per 6 00 000 population) when our first case was detected.

Unfortunately, there were also a lot of people who saw an opportunity to make money from the situation (especially with increased donor funding being given to the government).

In my opinion, this pandemic has showed PNG that it needs,

Being a doctor in the pathology lab, I was directly involved with the covid-19 response in the national referral hospital. My normal duties were affected in terms of the outpatient services provided by the lab. I organized the response plan for forensic pathology department while also volunteering with the national surveillance team at the hospital. My wife, being an emergency physician was responsible for the covid-19 emergency response at the hospital. We were both very busy with preparation in our respective departments. The hospital stopped accepting all outpatient referrals during the state of emergency lockdown period as a precautionary measure. My biggest concern at that time was the rejection of patients during the covid-19 hype. Looking back I think we could have planned our response better.

All schools were shut during the state of emergency in March. I have a daughter who is in grade 4. She received and did her activities online during the lockdown.

During the shutdown period the city was much cleaner. As restrictions were being lifted I could see a change in people’s attitude. They had become more conscious about the environment with regards to distancing and also people had become more aware of personal and hand hygiene practices. 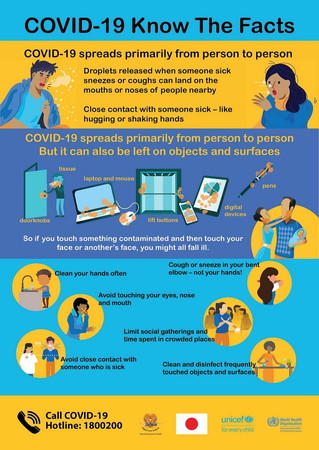 Information materials on COVID-19 prevention (English ver.) jointly developed by National Department of Health and WHO are being printed with support from UNICEF and the Government of Japan.