Malaysia has been affected by the COVID-19 pandemic as early as January. The first case COVID-19 was first detected on 25 January on travelers from China arriving via Singapore following the outbreak of COVID-19 in Hubei, China. The number of cases has been low until March where the first big cluster of COVID-19 occur following a religious gathering in Sri Petaling, Selangor. The gathering was attended by almost 16000 participants all over Malaysia as well as from neighboring countries such as Brunei and Indonesia. Within a few weeks, Malaysia had recorded the largest cumulative number of confirmed COVID-19 infections in Southeast Asia, breaching over the 2,000 mark in active cases by the end of March from fewer than 30 at the start of the month. By 16 March, the virus is reported in every state and federal territory in the country.

To date (April 19, 2020), Malaysia total number of COVID-19 cases are 5,389. There is a total of 2,103 patients still being treated in Malaysia. A total of 46 remain in the intensive care unit with 26 of them requiring ventilators. In total, 3,197 patients have fully recovered from the virus in Malaysia, including the 95 newly discharged patients reported on Sunday.

On March 16, 2020 the Prime Minister which was newly appointed few weeks prior has announced that Malaysia will undergo a nationwide “Movement Control Order (MCO)” which will begin at 12am of March 18, 2020. This MCO was intended to mitigate the spread of COVID-19 through social distancing which all Malaysia are required to stay at home and not allowed to go out unless for emergency and to get necessary items such as foods and medications. All schools and universities are closed until 31st March 2020. The announcement however creates another concern to the mitigation of the virus as many Malaysians goes for panic buying. In addition to that, public transportation hub such as airport, bus and train station were crowded with public as many wants to go back to hometown to stay with their family.

On 25 March, the MCO was extended by an addition two weeks, until 14 April, as the rate of new cases per day remained consistently high. Considerations have been made to extend the lockdown until late April or May as the World Health Organization (WHO) projects that the number of cases in Malaysia is expected to peak in mid-April, and on 10 April, the MCO was announced to be extended until 28 April.

As COVID-19 has heavily impacted the Malaysian economy and the wellbeing of its people, the Government of Malaysia has been announcing a slew of measures to aid the people and businesses to make it through this trying time. On Friday, 27th March 2020, the Prime Minster announced the PRIHATIN Rakyat Economic Stimulus Package amounting to RM250 billion for Malaysia. This package is equivalent to 17% of Gross Domestic Product (GDP) compared to the 8% of GDP (or RM67 billion) package introduced during the 2008 Global Financial Crisis. Policymakers project for the stimulus package to add 1.5% to GDP in 2020. Prihatin included initiatives valued at RM100 billion to support businesses, including Small and Medium Enterprises (‘SME’). After receiving feedback from stakeholders, the Government announced the Prihatin SME+ (‘Prihatin SME+’) package on 6 April 2020.

After the announcement of MCO, working from home with family has become a new normal. For us academic of the university, we have to report to the head of department and dean on the outcome of working from home. Basically, we have to report on total number of papers has been published, articles submitted, grants applied as well as meeting attended. Almost every few days we will have meeting online via different platforms of online teleconference such as Zoom, Webex, Google, Meet and Skype. There are pro and cons of working from home. The main advantage is you can work at the comfort of your own house. However, there are a lot of challenges such as temptations to do other things as well as to entertain your family members especially if you have children. Lecturers and teachers also conducted classes online as well as giving assignments to work on. However, some parents and students’ complaints that it is not fair to all as not everyone receive or subscribe to fast internet speed. Some students having difficulty listening to online lecture when their internet was often disrupted due to poor signals. Because of this concern, Universiti Putra Malaysia do now allow online classes at the moment. The semester has been delayed and postponed. Student are required to study on their own or listen to uploaded video online with not live streaming lectures allowed.

One point to ponder is that lockdown affect people differently. Some people

lost their source of income, some are enjoying their long ‘holiday’, and some people

develop mental health problem. The quarantine is beginning to have serious

negative effects on the population’s mental health. Not everyone can cope with the lockdown positively. Due to this, the government has issued a helpline to Malaysian in case they have a mental breakdown due to COVID-19. Nevertheless, there are many creative trends can be seen on social media such as Tiktok, Instragram and Facebook. There are lots of new recipes to try on, new dance move as well as online group fitness. Everyone is doing their best. Thank you to the frontliners for their hard work and sacrifices. Thank you to Malaysian for staying at home and playing their role in preventing the spread of COVID-19. Our motto is #kitajagakita which means we take care of each other. It will be over soon. 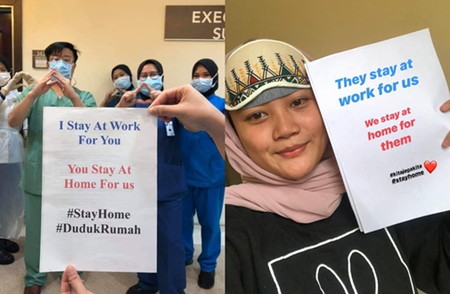 Medical personnel and Malaysian works together to overcome this challenges. 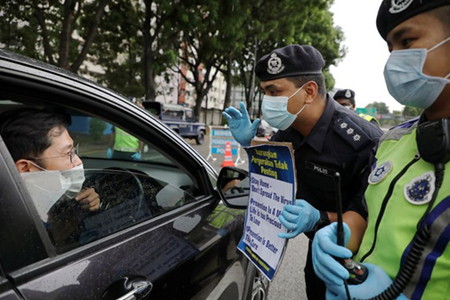 Malaysian are not allowed to travel more than 10km from their home. There are roadblocks everywhere to control the traffic