A brief situation of the Covid-19 infection in Laos

A brief situation of the Covid-19 infection in Laos

Laos faced COVID-19 in the same capacity as some several countries throughout the world, that is, we are a small country with a low population density. COVID-19 was confirmed in our country since 24 March 2020 in a lady tour guide from Vientiane, our capital city. It was reported that she was with a German group tour in the province from 7 March 2020. Then she felt uncomfortable since 16 March 2020 and was finally checked and admitted to the hospital on 24 March 2020. After that, the second case and many other cases followed one after another. Most of the affected people returned from Thailand and England. To date, 4 May 2020, a total of 19 cases were reported in Laos without any fatality (zero death case).

In Laos, three laboratories, namely, National Centre Laboratory for Epidemiology (NCLE), Institute Pasteur du Laos, and Mohosot hospital have been responsible for the lab analysis samples for COVID-19, and government will report the case only after at least two labs confirmation, and then the patient must stay in hospital within an isolated room and looked after until a negative test result has been achieved. The person after staying in the hospital, she/he must be confined to home for 14 days and virus checking conducted again to make sure that the person is completely cured. 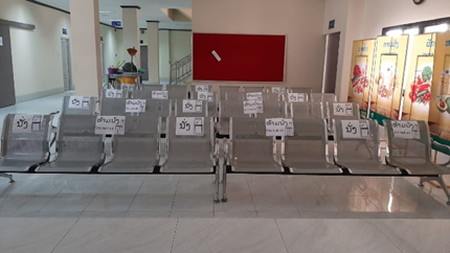 Social distancing of seating arrangement at the hospital lobby

This COVID-19 virus constitutes a major threat to human health. It has been spreading very fast, damaging human lung seriously especially elder people and they died suffering, and cause considerable socioeconomic problems globally. People have to stop their usual activities, stay at home, social distancing, which is very necessary for prevention of the spread of the disease. It is a very bad situation, because medical tools and health assistants were lacking in the hospital. Social confusion has occurred in the world. 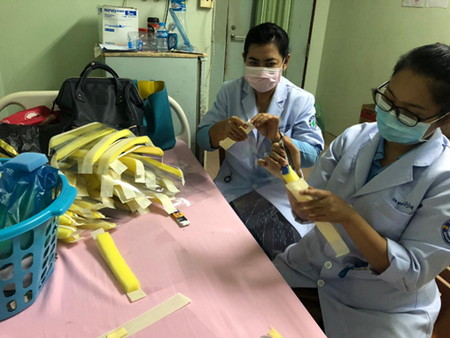 There were nearly 2 months to stop going for work, curfew situation has been implemented for whole country, school has to stop and all systems were on the brink of collapsing. People has insufficient foods, society context is changing, and isolation is being considered as safe, and the family life is not the same as before.

(An alumnus of SSP from Laos)