In order to prevent the spread of the disease, a state of emergency was introduced in the country from March 16 to May 1, 2020: restrictions on entry and exit from the country were established, quarantine or other restrictive measures were introduced in all regions, the operation of large non-food retail outlets, movie theaters and other crowded places.

From January 26, 2020, sanitary and epidemiological control at checkpoints across the state border was strengthened, and training exercises were held.

In the country there was a shortage of medical masks in pharmacies. Subsequently, it was reported that speculators who pre-bought masks sold them at inflated prices.

Since February 20, a methodology has been introduced for ranking countries into 3 categories, depending on the degree of risk of the spread of coronavirus infection. Depending on the level of risk, persons arriving from countries that are not in accordance with Covid-19 are subject to appropriate medical monitoring.

Since March 1, the Ministry of Health introduced the fourth stage of strengthening. Persons who arrived from category 1a countries were placed in quarantine for 14 days, and then they were also under medical supervision for 10 days. Persons who arrived from category 1b countries were placed in home quarantine for 14 days; by the decision of the sanitary service, these persons could be quarantined in a medical facility. Persons arriving from countries of the second category were under medical supervision at home for 14 days, followed by a 10-day call. Persons arriving from third category countries were remotely monitored by phoning for 24 days.

In connection with the introduction of special security measures in the country because of the threat of the spread of coronavirus, universities have switched to online education. The state has taken a number of measures to protect the population. On March 16, early holidays were announced for schoolchildren of Kazakhstan, and students were transferred to distance learning.

Since March 19, around the border of several regions of Kazakhstan, around a number of large settlements, round-the-clock sanitary posts were placed.

On March 30, the State Commission for ensuring the state of emergency, executing the instructions of the President of Kazakhstan approved the decision to establish a monthly fixed bonus to the salary of medical workers involved in anti-epidemic measures. One-time payments were also provided: in case of illness of a health worker - 2 million tenge, in the event of his death - 10 million tenge.

On April 3, at a meeting of the state commission on the proposal of the Ministry of Health, it was decided to build three infectious hospitals for 200-300 people from quickly erected structures in the cities of Nur-Sultan, Alma-Ata and Shymkent.

To support businessmen whose financial situation worsened due to the state of emergency, on March 20, the government of Kazakhstan signed a decree on exemption from payment of taxes until December 31, 2020: 1) property tax for legal entities and individual entrepreneurs at large retail facilities, trade entertainment centers, cinemas, theaters, exhibitions, and fitness and sports facilities; 2) land tax on agricultural lands of agricultural producers; 3) individual income tax of individual entrepreneurs working in the generally established taxation procedure. He also suspended interest on unfulfilled tax obligations until August 15, 2020, and postponed the deadline for submitting tax reports to the third quarter of 2020.

Working citizens of Kazakhstan who lost income during a state of emergency due to forced leave without pay, as well as self-employed and who worked informally, received payments from the state social insurance fund. The amount of social payment per employee amounted to 1 minimum wage (42.5 thousand tenge per month).

On April 9, a team of doctors from China (infectious disease specialists, virologists, pulmonologists, resuscitators, public health experts) flew to Nur-Sultan in order to consult Kazakhstani doctors in the capital, Alma-Ata and Karaganda for 15 days. On the same day, a plane flew in from China with five tons of humanitarian aid (masks, gloves, thermal imagers, ventilators, drugs).

On April 14, by decree of the President of Kazakhstan, the state of emergency was extended to 07:00 on May 1.

Many people sit at home, and they only go to the store and the pharmacy, but there are those who do not take the situation seriously and walk on the streets of the city.

Kazakh scientists and virologists are working on the development of our own test systems for the screening of coronavirus and the development of vaccines. They need the support of the state and the necessary conditions and I hope that our state will provide them with this.

In addition, this situation imposes a tremendous responsibility primarily on the sanitary-epidemiological service (SES) of the country. Assuming that epidemics of this magnitude are likely to recur in the future, one should think about a significant strengthening of the SES service, providing it with professional staff of epidemiologists, hygienists and sanitary doctors.

The squirrel sculpture symbolizes the life of citizens. The art object was installed in July 2018 and represents the life of citizens, the squirrel, like ourselves, is in constant motion, it must constantly adapt to a changing environment, look for resources for survival. However, she is not a predator, this is a good creature. In its paws, the Almaty squirrel holds an acorn as a reward and a symbol of hope for the future. " 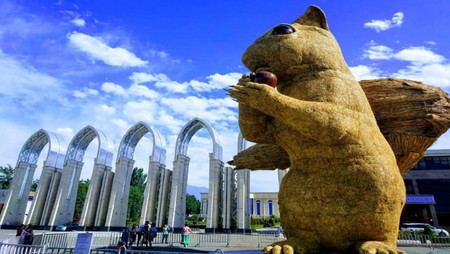 Squirrel, as a resident of the city, also supports you in the fight against a pandemic. A mask is just a symbol. After all, the main thing is unity in this situation. “Birge” means “together”. 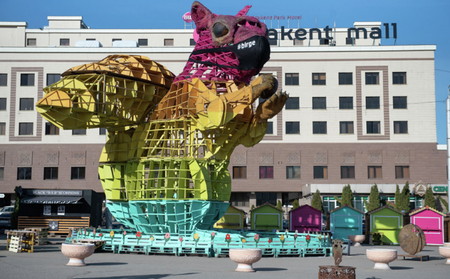 We could find a plus in the introduction of quarantine - for the first time in many years, the smog scattered over the city of Almaty, Kazakhstan 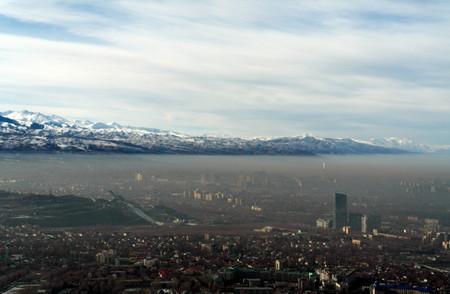 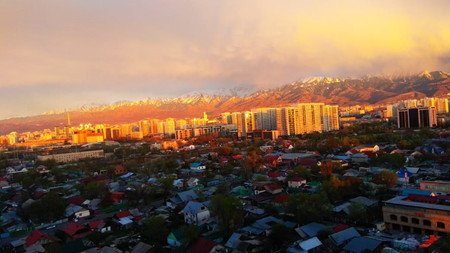