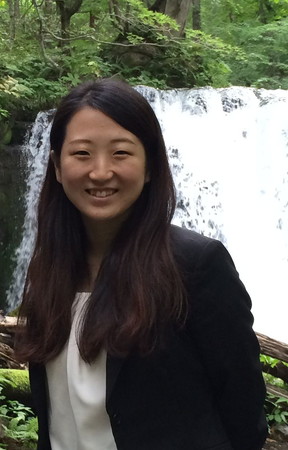 I think the greatest problem caused by the pandemic in Japan is the economy. The Government of Japan took the following countermeasures in cooperation with each of the prefectural government.

Countermeasure name: State of emergency and priority measures to prevent the spread of the disease.

Major contents of the countermeasure: Refraining from going out, refraining from travelling, shortening the business operating time of restaurants, limiting the provision of alcoholic beverages at restaurant (with penalties), limiting the number of people participating or attending an event.

Although it is difficult to judge the effectiveness of the countermeasures, the high number of infected cases tends to plateau off when emergency situation is being declared. The emergency declaration might have impacted the people to be aware of the severity of the disease. Thus, I think the self-restraining behavior of the Japanese people might have led to the reduction of the number of infected people.

When the SARS-CoV-2 virus infection (Covid-19) first started to spread in Japan, the government paid 100,000 yen to each and anyone who would like to receive the special flat-rate benefit. In addition, I felt that the range of assistance gradually expanded to the provision of cooperation funds for businesses that were forced to close due to policies of the declaration of emergency, and also to families burdened by child-rearing, and special benefits for single-parent households. However, many people complained that they could not survive using only the cooperation fee which was a compensation for temporarily closing down their business. Moreover, the application process for the cooperation fee was complicated and the payment of the money was delayed. Thus, it is doubtful whether such a countermeasure is effective or not.

There was no lockdown in Japan.

No penalties were imposed on those failed to observe the rules of the new normal, such as wearing mask at shopping centers or observing social distancing.

In addition, when the attending physician determines the necessity of the examination for those returning from abroad or suspected closed contact person, the examination is carried out at a medical institution designated by the prefecture. In some areas, with the cooperation of regional medical associations and other organizations, a "regional outpatient /examination center" has been set up to carry out the precise intensive examinations.

In the fifth wave in Japan, Delta variant was found to be rampant.

Vaccination for healthcare professionals began in late February 2021, and full-scale vaccination started for the elderly in mid-April and also after the so-called Golden Week in Japan.

In Japan, three types of vaccines are used, namely, Pfizer, Takeda/Moderna, and AstraZeneca. In principle, AstraZeneca's products are intended for people aged 40 and above. However, it can also be used for people above 18 years, who have special need for this brand of the vaccine, such as being allergic to the ingredients contained in other brand of Covid-19 vaccine. Opportunities for being vaccinated with the AstraZeneca vaccine are quite limited and most of the people are usually vaccinated with Pfizer or Takeda/Moderna vaccines.

As preventive measures, we are encouraging the avoidance of three dense (congregating densely with other people, close contact, poorly ventilated space), wearing a mask, washing hands with soap, and disinfecting hands by rubbing with alcohol.

Although clinical research is being conducted at Kitasato University, ivermectin is not considered to be necessary for all because it was reported in overseas clinical data there is no significant difference in mild cases. Ivermectin may still be considered as a useful drug as clinical studies are ongoing for moderate and high-risk patients. In addition, taking the drug orally (once a day for 5 days) may be a reassuring medicine for patients under home quarantine or those receiving health care at home.

Charitable activities such as preparing meals for people in need and providing household supplies were carried out by philanthropic institutions. In addition, prayer for the elimination of the plague was carried out using fireworks which are typical traditions of the Japanese, and a flight show by the acrobatic Blue Impulse of the Japanese Self Defence Air Force was held to show gratitude to the frontliners and medical staff.

In Japan, there are almost no areas where the Internet is not available. When online classes were held, PCs and computer tablets were provided or lent by the school so that there will be no difference in the learning environment due the difference in household income.

The negative impacts of the pandemic were the increasing distances being formed among people, the widening of the inequality gap between the poor and the rich, and the burden on health care workers. The positive effects were that the time spent with the family members had increased, the lessening of the burden of commuting to school and hospitals due to the decrease of crowded trains and the way of working has been reevaluated. 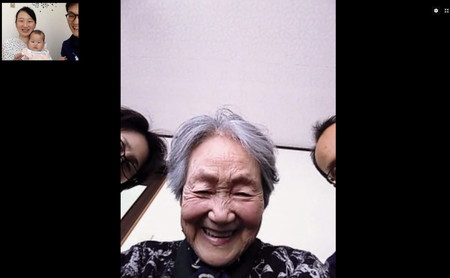 ↑ To prevent infection and refrain from travelling, I made a videophone call to my distant grandmother (My grandmother has never met her great granddaughter in person even the latter is already 1 year old) 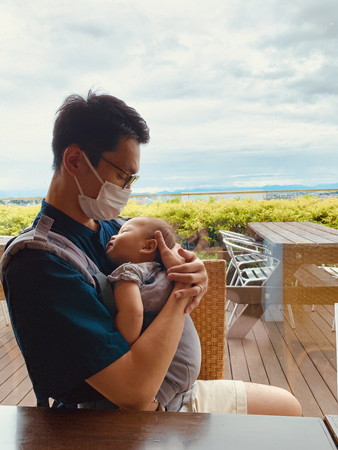 ↑ Adults wear masks but not children or baby (Baby is under 2 years old)
When children see their parents wearing mask, they reacted as though they will go out too.