On January 16, 2020, The Ministry of Health, Labor and Welfare, Japan, announced that a case of the new coronavirus was detected in a man in his 30s, living in Kanagawa prefecture who had returned to Japan after staying in Wuhan City, Hubei Province, China. While still in Wuhan City, the man already had fever from January 3, 2020. After returning to Japan on January 6, 2020, he visited a hospital in Kanagawa prefecture, Japan, and was then diagnosed as being infected with Covid-19. Many of the infected cases in Wuhan were thought to be associated with the seafood market there. However, this Japanese patient said that he did not visit the market there, but have lived with patients who were suspected to have the new corona virus during his stay in China.

Since January 16, 2020, there has been an increase in the number of cases who acquired the infection through intimate contact with confirmed patients, as well as the outbreak of hospital-acquired infections. On February 3, 2020, the cruise ship Diamond Princess (hereinafter referred to as the cruise ship) sailed into Yokohama Port. She was confirmed to carry infected passengers on February 5, 2020 and the Japanese government quarantined all the passengers and crews on board the cruise ship. Only the sick passengers were brought ashore to the hospital for treatment. Many mistakes and negligence on the prevention of the virus transmission were made regarding to the quarantine measures carried out on board the cruise ship. As a result, 712 passengers and crews were found to be infected, with 13 death and 651 recovered. After the cruise ship incident, the number of patients whose infection route could not be traced increased exponentially, and the number of infected persons per day reached 368 on April 7, 2020. On that day, 7 prefectures and metropolitan cities (Saitama, Chiba, Tokyo, Kanagawa, Osaka, Hyogo and Fukuoka) issued an emergency declaration regarding the disease. On April 16, 2020, with 576 new infections cases reported per day, the emergency declaration was extended to all the 47 prefectures and metropolitan cities nationwide. This declaration request people to refrain from going out and suspend commercial activities, recreational facilities, restaurant operation and festive events. Unlike other countries, it was a self-restraint request not to go out. Despite without any police enforcement, the number of people in the streets was significantly reduced.

◼Changes seen in Japan due to the coronavirus outbreak

◼On infection control in Japan *3

To prevent the medical support collapse and spread of infection (control of cluster outbreak), the following measures were requested of the public after the coronavirus infection started.

In addition, the corona virus has changed our lifestyle to a new “normal”. To co-exist with the virus, new rule and regulations has been introduced in commercial facilities, schools and companies. These include regular ventilation and social distancing to prevent congestion among humans. Various measures are also taken, such as keeping a distance of more than 2 m apart, admission restrictions, temperature measurement, obligatory wearing of a face mask or face shield, and setting up alcohol disinfectant for hands at the entrance of the commercial establishments. 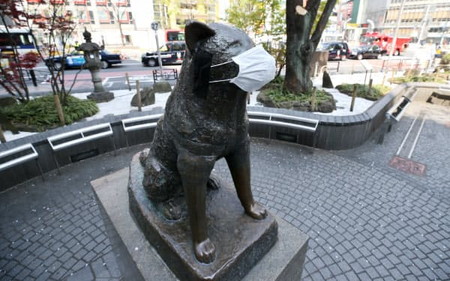 Deserted area at Shibuya, Tokyo, after the emergency declaration *4 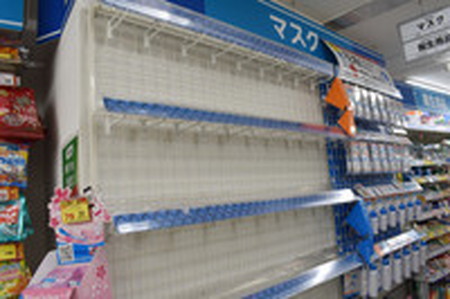 Face mask being sold out at the shop *5