Bhutan is located in the Himalayas neighbored by China in the north, sandwiching majority of the land by Indian states of Assam, West Bengal and Arunachal Pradesh. Bhutan confirmed its first case on 6th March 2020 from a 76 years old male tourist from United States of America who travelled from India on March 2nd via Paro-international airport. On 20th March, 59 years old female partner of the tourist tested positive after 28 days of her first contact. The third, fourth and fifth case were Bhutanese students returning from various affected countries and tested positive on 25th March, 29th March and 1st April 2020. Currently, Bhutan have 5 Covid-19 cases, of which two are international tourist who are recovered and the rest are Bhutanese citizens.

Just immediately after the first case was confirmed, Bhutan immediately restricted entry of foreign tourists for two weeks. Schools in three areas including capital Thimphu were closed. Adhering to the National Preparedness and Response Plan, and the operating procedures in place, all follow-up actions were initiated immediately. His Majesty the King personally oversaw implementation of the response strategy, as teams operated from Ministry of Health all through the night.

As Businessmen and students are constantly being evacuated from affected countries to Bhutan, the Prime Minister Dr. Lotay Tshering announced the further closure of Schools and Universities until further notification to minimize the risk of transmission. Owing to erratic incubation period of the Covid-19 virus, the Prime minister announced the nation on increasing the quarantine period from 14 Days (WHO recommended) to 21 days to all citizens entering the country. However, the returnees were also allowed to home quarantine with strict monitoring.

With the numbers of coronavirus infections in neighboring India rising, increased security and prevention measures have been set up in the southern districts which border the Indian states of Assam and West Bengal. These measures include round-the-clock surveillance of all formal and informal border crossing points, and door-to-door COVID-19 awareness and prevention campaigns. Although, no lockdown measure is being taken till now, public gatherings, night clubs and other entertainment modes are restricted. Just recently, the Prime minister directed all shops and supermarkets to remain closed after 7pm.

Other measures include installation of hand washing facilities, distribution of hand sanitizers and deployment of Army personnel and policemen to monitor the public compliance on the Government orders. Roads linking to southern districts are guarded by policemen for registration of drivers and passengers to help trace the people if confirmed positive for Covid-19 later. Presently, Bhutan have quarantine centers all over the country including isolation wards equipped with rapid detection facilities.

Having said that strict measures are being taken to prevent the disease spread, no restriction of movement of transport vehicles are imposed and life is more or less normal. However, engaging students through online teaching (E-learning) seems to be quite challenging as Bhutan experiences the situation for the first time.

The Royal University of Bhutan 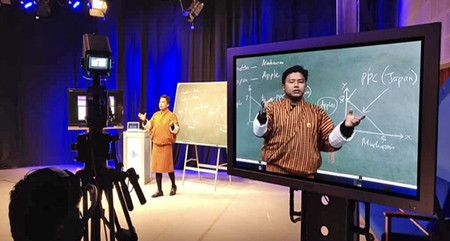 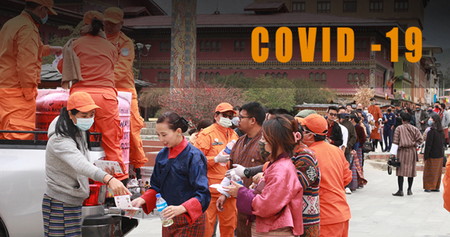 Distribution of Hand Sanitizer to the Public