COVID-19, The Pandemic in Bangladesh

COVID-19, The Pandemic in Bangladesh

Following the outbreak of COVID-19 in Hubei (China), the government and the concerned body, Institute of Epidemiology, Disease Control & Research (IEDCR) were observing the situation and following the WHO guidelines. With the declaration as emergency by the WHO, a large number of people including students returned home until the mid February from China without much screening which was the initial threat and matter of concern. From then on, the government was taking preparation to face the pandemic. When Covid 19 affected badly the European countries, especially Italy, huge number of Bangladeshi from Europe as well as from Middle East and neighbouring South-East Asian countries were back at home by March through different ports and received only thermal screening. Though the Govt. arranged institutional quarantine for the returnees, they refused to stay, claiming the lack of facilities. Then they escaped, despite the advice of home quarantine guidelines whereas some of them (returning later on) were pushed to institutional quarantine. Though the govt. enforced local administrations to ensure their home stay, the proper quarantine was not maintained. With these, Bangladesh entered the pandemic era. 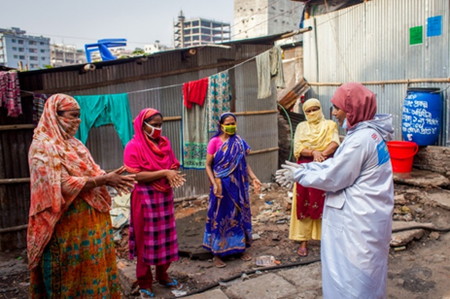 IEDCR was in close observation and started testing as the only institute for Covid-19 cases around the beginning of February and the first case was reported on 08 March while the first death was on 21 March, 2020. Among the first three detected person, one was from Italy another two were in close contact of that person. The number of cases has been low until the mid of April and mostly in the capital city, Dhaka but by now patients have been detected in almost all districts of the country. IEDCR has declared health emergency since community transmission were evidenced and announced Narayanganj (adjacent to Dhaka) as the epicenter of the outbreak in the country. 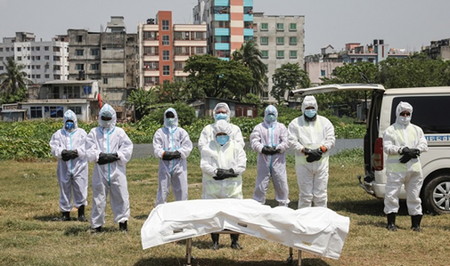 Medical personnel preparing to handle the victim of Covid-19

To date, a total of 8,238 Covid-19 cases (out of 70,239 tests) and 170 death have been reported while 174 persons have been recovered. Since around 79 % patients are taking treatment from home (according to the Ministry of Health), the actual data of their recovery is not recorded and not included as well in the official recovery data. In 24 hours duration until now a highest of 641 cases and 15 deaths have been reported. Among the total cases 11 % are health workers and a big percentage is shared by the security forces and other frontline administrative workers, which is a matter of concern to the government.

With time, the number of test centers (at present near above 30) and tests have been increased. With the increased number of tests, the number of reported cases also increased. Now around 5000 tests daily are being performed, which is not still enough for such a densely populated country with around 16 crores (160 million) people. Due to limited number of tests people are not sure yet whether they are experiencing the peak of the pandemic or not. The govt. is trying to expand the number of test centers to ensure at least 10000 tests daily to find out the true picture of the pandemic in the country. The authority is expecting to have as much as 50000 cases with 1000 deaths at the end of the May statistically. Though there was shortage of PPE, masks and test kits at the beginning, now the govt. is announcing that enough number of them are in storage. Some field workers claimed not to get enough protective equipment and some health workers questioned about the quality of the supplied PPE in the mass media through different news channels. That is why the govt. is now strictly checking the quantity and quality of PPE as well as other necessary equipment. 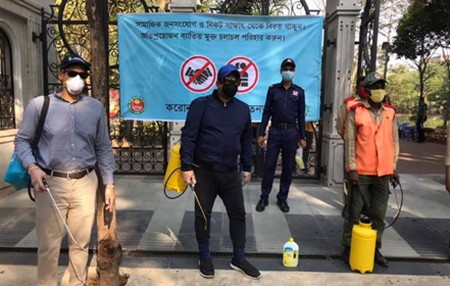 Measures taken by the Government

A national committee was formed followed by the first case detection to make more awareness among the people across the country, observe the situation and figure out the necessary doings. Firstly, on 18 March, came an announcement to close all the educational institutions. Recently, the Prime Minister Sheikh Hasina has told in a press briefing that if the situation continues then educational institutions will have to consider opening in September. With the advancement of the pandemic, to control the spread of the infection and to maintain the social distancing, the govt. declared a general holiday from 26 March to 3 April and advised all the people to stay home and abide by the Covid-19 health regulations. Considering the state of spread, now it has been extended up to 5 May 2020. With the announcement, people got panicked and a large number of people migrated from Dhaka throughout the country to stay with family, thus increasing the risk of spreading the infection (later on the contact tracing revealed most of the detected patients in other districts were those who migrated from Dhaka and Narayanganj). To restrict the movement, the govt. immediately imposed restriction from 26 March on all kind of public transportations (road, air & water) except emergency like medical, food, drug etc. and any kind of public gatherings in home, open places or in any religious places and closed the borders too. People are being pushed to stay and pray at home by the law enforcement and only allowed outside to buy food and drugs. On 25 March shopping centers were also shut down. Many districts imposed lock down after having reported cases to limit the spread.

The govt. and the technical committee took some early measures to protect the frontline fighters and to provide proper healthcare facilities to the affected patients such as managing enough PPE, masks, test kits, dedicated hospitals, oxygen cylinders, ICU beds, ventilators, telemedicine services throughout the country and also arranging proper funeral for the deaths. But according to the public thinking, it is not enough for the big population. National and local administrations and security forces are working relentlessly to ensure social distancing in both urban and rural areas and market places and health workers are also giving their best efforts.

The govt. has provided combined harvester, ripper machine to the farmers to harvest and save the Boro rice from early flood. Around 70-80% of the paddy fields has been harvested already. This is a good initiative and good news to overcome the food crisis issue during pandemic.

To fight the economic and food crisis after this pandemic, the Prime Minister has eyed on agriculture and urged all the people to utilize every inch of cultivable land. Considering the shutdown situation, the govt. as well as different NGOs, political parties, leaders, private companies, individuals are distributing food to the low income people. Despite criticism, to gear up the wheel, limited garments industries have got the permission to start production from 26 April 2020 with the condition of maintaining proper health guidelines.

Like all other countries, Bangladesh is also experiencing economic crisis since its major source of remittance (garments sector and expatriate income) has been hurt. Other than this, large number of people are in fear of losing job and going under the poverty line again.

Around 4 crores of students are expected to suffer from session irregularities in this pandemic. The govt. is telecasting recorded lectures for the students up to high school level and private universities are conducting online classes whereas academic activities of the most public universities are in complete shutdown.

The progress of many mega development projects (such as Padma Bridge, Metro rail etc.) of the country is halted.

The year 2020 was declared as “Mujib Borsho” (Birth Centenary of the Father of the nation) and was expected to be the year of celebration for the Bangladeshi people. But due to Covid-19 the govt. called off all the programmes. This year the people also missed the celebration of “Pohela Boishakh” (the Bengali New Year). As a country having mostly muslim population, now people are expecting to celebrate their biggest religious festival after the holy month of Ramadan (at the end of May) which is still in doubt. These things are affecting the mental health of the individual as well as the society. To overcome this, people are advised to get attached and spend quality time with the family members, to eat nutritious food, to exercise regularly, to listen to music, spend time in yoga, gardening, reading books etc. I am following the instructions of staying home, spending time with family members and on social media, keeping contacts with my colleagues, students, friends and relatives, taking hand on exercises, watching movies, reading scientific journals and searching for the opportunities to pursue my higher studies.

Most of the people are trying to follow the instructions but some are bored of this after more than one month staying at home and some people are trying to come out of home without any emergencies as shown in the mass media. People are claiming that they are out for searching of work and money. But the govt. and the authority have urged the people repeatedly to stay at home and stay safe. Like many other countries the govt. is now thinking of relaxing some movements to start up some emergency sectors while maintaining proper health regulations and social distancing.

With this pandemic, people of Bangladesh think that the govt. should invest more in health sectors and related research works, and establish an organized health care and surveillance system across the country to combat such pandemic in future.

Finally, I would like to salute to all of those who are fighting to save the people, save the nation as well as to save the world from this pandemic. No matter how dark the sky seems, the sun will always shine again.